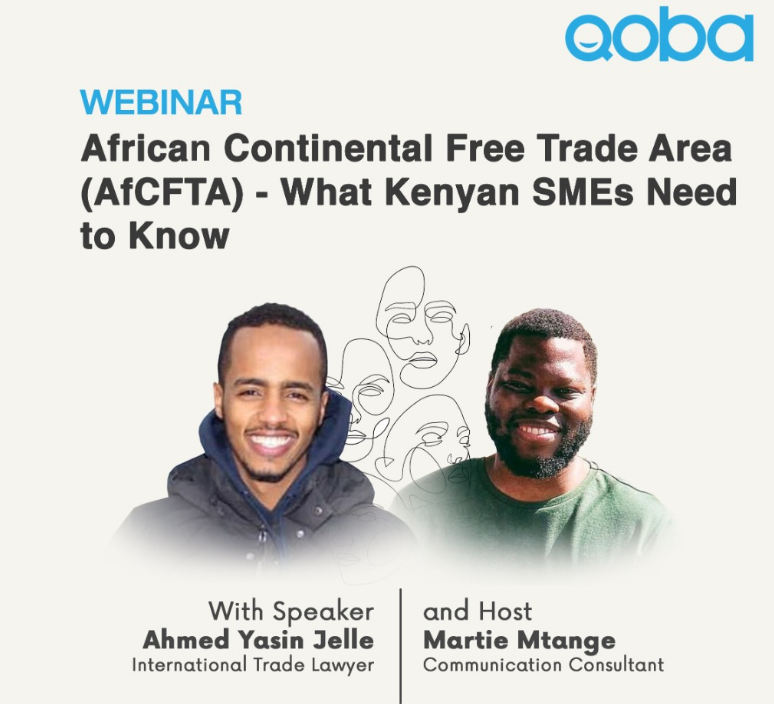 The article below is based on a webinar we hosted on July 13, 2022, in which we invited Ahmed Yasin Jelle to share with Kenyan SME owners what they need to know about AfCFTA (African Continental Free Trade Area).

Ahmed Yasin Jelle is an International Trade Lawyer and the author of Economic Integration and Globalisation in Africa: Regional Economic Communities within the Context of the African Continental Free Trade Area.

Ahmed’s book is available on Amazon – Economic Integration and Globalisation in Africa: Regional Economic Communities within the Context of the African Continental Free Trade Area.

This article was originally published on Corporate Jurors, and we have just reposted it in its original form.

Kenya’s SMEs sit at a vantage point to explore growth opportunities presented under the Africa Continental Free Trade Area, which is Africa Union’s blueprint and master plan for transforming Africa into the global powerhouse of the future.

Ahmed Yasin an international trade law advisor said in a webinar hosted by Qoba, a provider of technology for SMEs to explore and navigate doing business in Africa that the CFTA if well implemented will also transform the African continent business environment and further cement it as the world’s largest market.

Launched for trading in January 2021, CFTA is a game changer in overall global trade, and Africa, which accounts for 2% of global trade and 20% of Africa’s exports being intra-African, compared to 59% for Asia 68pc for Europe.

“With these numbers, the potential for growth is significant, ” says Ahmed, “it’s a much-needed platform which will create the largest free trade area in the world, measured by countries participating, Ahmed adds. 54 countries have already signed the Agreement, except for Eritrea, with the CFTA projected to connect 1.3bn people with a combined GDP of 3.4trillion dollars. Ahmed is quick to note that the CFTA is coming into force at a time when most of the world is turning away from corporations in free trade to more nationalist, protectionist measures.

The objectives of the Agreement which also include creating a single continental market for goods and services, with free movement of business persons and investments, expanding intra African trade and resolving the challenges of multiple and overlapping memberships, saw the paperwork signed in 2018, and becoming law in 2019. Similarly, by June 22 this year, 43 countries have given their tools of ratification representing 80% of members, while 88% of the negotiations on products and rules of origin have been concluded.

Ahmed says the Agreement however comes at a time when other trading blocs already exist and it is envisioned that the existing trade blocs will act as building blocs to the smooth implementation of the CFTA, and will play a crucial guiding role on how trading blocs interact with each other. “The CFTA has for instance found for instance the East Africa Community EAC, Southern African Development Community, SADC and the Common Market for Eastern and Southern Africa, COMESA, it is expected that the existing ones will not be a stumbling block, and the Agreement has created provisions to ensure cohesion with external parties” added Ahmed.

Other benefits that Kenyan SMEs are likely to reap include access to financing which has remained a challenge for the small and medium businesses, who also struggle to access much needed financing from bank institutions. The CFTA secretariat has signed MOUs with entities such as Afri Exim Bank, Equity Group among others to procure funding for SMESs.  “If an SME can show that it plays a role in the production of made in Africa commodities, it will be able to access funds”, says Ahmed.

Under-developed value chains in Africa, high level of tariffs across regions, poor infrastructure and lack of access to markets to test products are the other challenges that Kenyan and African SMEs face. He says implementing the CFTA will also help Africa weather shocks better , citing the global Covid 19 pandemic.

At the same time, Parliament will be expected to develop policies to ensure the CFTA is implemented and observed. Ahmed notes that every international treaty that Kenyans become a signatory, automatically becomes part of Kenya’s legal framework, requiring parliament to develop legislation to support the same.

By Joan Njoki. The original article was published on the 22nd of July 2022.